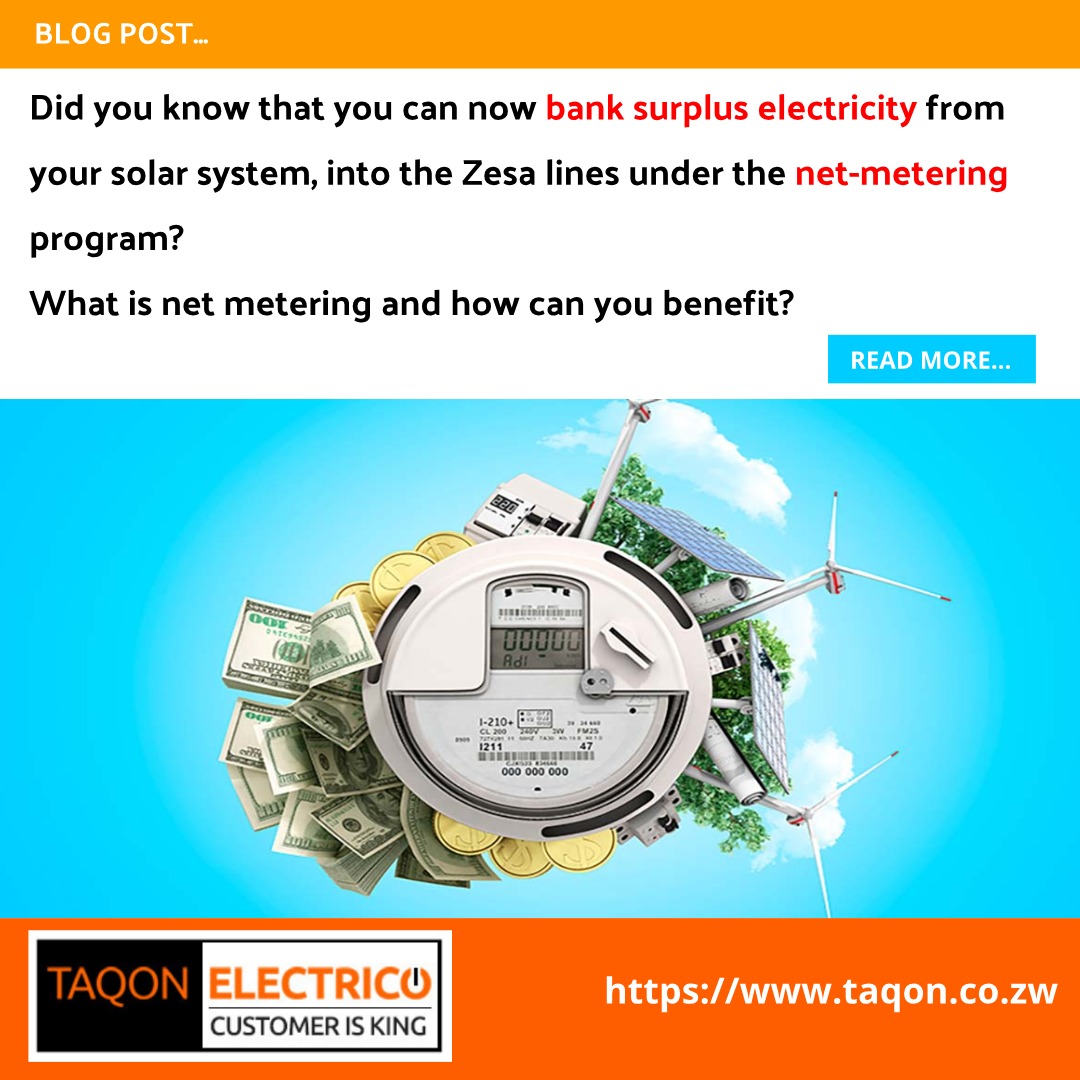 Is net metering good for solar owners in Zimbabwe?

Is net metering good for solar owners in Zimbabwe?

Recently Zesa opened doors for those with solar systems to inject some of the power they generate into the grid. They dub it Net Metering. We wrote about this before. Kindly click here to read deeper. Still, today we are only going to focus on whether this program is beneficial in Zimbabwe.  We will make a few simple mathematical calculations to see if this makes sense at all.

However, for our new readers, it is good if we discuss in a few words what net metering is.

What is net metering?

Net metering is a billing mechanism that credits solar energy system owners for the electricity they add to the grid.

How does it work?

During daylight hours, it is possible that your solar system may generate more electricity than what the home is using. Have you ever wondered where this excess power goes? In some instances, this power is used to charge your batteries, but what happens when the batteries are full? I guess you have figured it goes to waste.

Thus, instead of that power remaining idle, you can ‘bank’ it into the Zesa grid for later use. This can be for night use or a time when your solar panels are generating less than your needs. It sounds clever right; I think as much. But remember, this arrangement only works when Zesa is available. You cannot inject power into a Zesa line when there is a power outage. That is why you cannot use just any type of inverter for Net Metering. A special type of inverter called a Grid-Tie inverter is used for that.

Yes. We are facing power shortages in our country. If many join this program, some demand of power is going to be offset, subsequently lessening the burden on Zesa’s generators. They call it distributed generation.

How other countries do net metering.

The program of net metering is not new to the world. It has been there in countries like USA, from as old as in the early 80’s. That is when we just got our independence, and we all know that it is a long time ago.

However, in some countries like the United Kingdom, authorities have been reluctant to introduce it due to complications in paying and refunding customers, but however, pilot projects are underway in some areas. On the same note, net metering is also marred by countless controversies because it affects different interests on the grid. Utilities reason that it poses a threat to their business model, as a result, some utilities in the United States have led campaigns to eliminate net metering. Another argument that those utilities present is that solar system owners do not pay the full cost of service to use the grid, thus shifting their share of the cost onto customers without solar systems.

On the other hand, in areas like Illinois State in the USA, as of June 2018, a handsome money was paid per kilowatt-hour of energy to institutions injecting power into Illinois Public Utility from their solar systems. They call it the Distributed Generation Rebate valuation.

In countries like Australia, solar companies actually give solar loans to residents. The solar system will then pay itself through compensations and incentives from the governments for installing solar. The governments there are motivating people to harness the renewable source of energy and giving incentives for injecting that power into the grid.

How net metering is done in Zimbabwe

Now, coming back home, Zesa has allowed people to inject into the grid but with no high incentives like in Australia and Illinois. You sponsor for your solar systems and also pay for the additional cost of the bi-directional meter that they install you. This means that no one will give you an incentive for going the extra mile of going green. We all know that going green saves our planet, but, wait a minute: you can still benefit from this program in a very technical way.

Tawanda is a father of 2 girls and has a beautiful wife, Mary, who owns a saloon in town. They have a home solar system which can generate an average output of 2000watts. So, during the day, Tawanda goes to work together with Mary, and their 2 girls will be at school, only to come back home around 4pm. Therefore, from 9am to 4pm, no one will be at home except for the house keeper.

Tawanda uses gas to cook, but owns 2 fridges, a washing machine, a big smart LED Tv SET, some fancy HiFi set, WiFi, a borehole and general home and security lighting and lastly a microwave oven. Everyone in the family owns a laptop too, and they require a continuous supply of power always.

However, during the day, when everyone else is at work, except for the house keeper, Tawanda’s electrical items require an average of 550watts of power to operate. Thus, we see that almost 1500watts will be generated as an excess amount of power.

The mathematical benefit of net metering in Zimbabwe

Now, with this setup, let us try to see if net metering benefits Tawanda here.

Let’s assume that it’s a good sunny day. We are getting an average of 2000w from 9am to say 3.30pm. From the excess that Tawanda is generating, which is an average of 1500watts, he can export 9.7 units of electricity to the Zesa power line.

Now this means if he had not joined the net metering program, all the 9 units were going to be lost.

But, where does 9 units take you in terms of usage. Now, getting back to our example, 9 units of power will allow Tawanda and his family to cook, watch tv, lighting and run their electrical appliances until the next morning. So, this basically means, Tawanda will run without the need of using electricity from the utility, whilst still enjoying the security and capacity of power that the utility can give. Since the utility has no fixed monthly charges on domestic consumers, it means with a very lean power management, Tawanda can pay next to zero Zesa bills, whilst not contributing anything towards its maintenance!

At least there is one countable benefit!

From this simple example, we can see that the net metering program can be used to your advantage. Although there are no incentives given in cash, with a good energy management plan, you can trim your Zesa bill. Let us just pray the terms will improve for the better. Otherwise, at least for now, there is a very good technical advantage from the net metering program. It allows you to bank power that you will otherwise lose if the program was not introduced. At least that is the only advantage available. It is better than not having it.

On top of these benefits, Tawanda also enjoys uninterruptible power from his solar system. When there is a power outage, his solar system will sustain him for days, in a friendly weather!

how we can help!

Why not get in touch with us for a free assessment of your power requirements? At Taqon Electrico we can organize you a good solar system. If the idea of net metering amuses you, we can help you through it as well. If you have an existing solar system, we can also help you enjoy the net metering program while it lasts. Do not hesitate to talk with us about your solar needs. Stay safe from COVID-19!

contact us
WhatsApp
SOLAR PRODUCTS
← All you need to know about solar. WHAT ARE THE SEVEN (7) SEVEN GREAT ADVANTAGES OF FIX AND SUPPLY IN SOLAR INSTALLATION? →